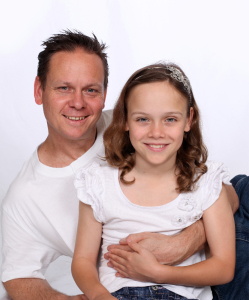 The tales of Eumundi’s adventures grew out of Stuart’s love for his daughter Kristen, his love of life, and his strong belief that a person can do anything they set their mind to. Wanting to encourage a spirit of adventure in Kristen, he told her stories about the amazing adventures of Eumundi and her friends.

Kristen was four years old when Eumundi came into their lives and the adventures began. As a young child, Kristen was fully engaged in these exciting stories and would ask many questions that have helped shape the stories. As she grew older, she helped fill in the details of the adventures and even writes her own Eumundi stories now … And she still loves a good Eumundi story to be told to her!

In creating the Eumundi stories, Stuart and Kristen use a combination of sources for inspiration. Some stories are based on real life adventures and holidays they have shared together with their family, while other stories have originated in their imaginations.

Stuart and Kristen know there are other children and families who would love to join Eumundi and her friends on their great adventures. So it’s with great joy that they have set about creating a series of books from the many stories they have shared through the years.

Come and join Stuart and Kristen as they take you on many fun-filled adventures with Eumundi and Friends!!!